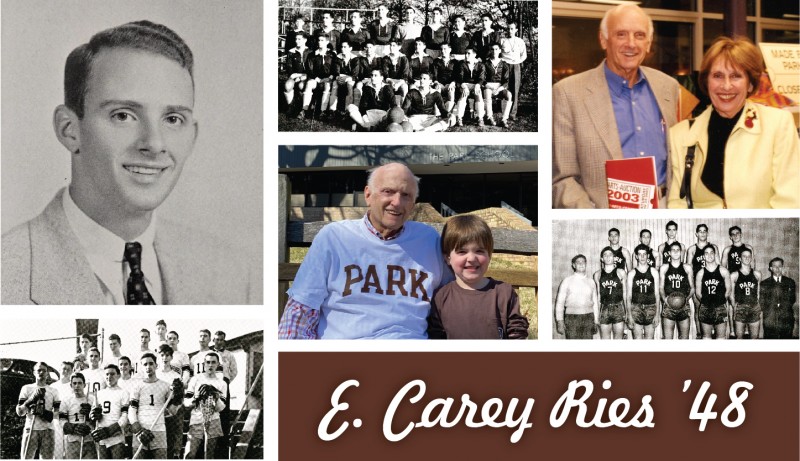 IN MEMORY OF CAREY RIES ’48

Carey graduated from Park School in 1948, but his connection to Park spans generations. His family has supported Park for nearly 100 years. In addition to his mother, Fannie, who graduated in 1923, Carey’s Park legacy includes his brother, Elkan ’44, his son Jim ’74, his daughter Sally ’79, and his daughter-in-law Leslie Sarubin Ries ’73, wife of his son Tom, followed by five granddaughters: Emily ’01, Amanda ’03, Carly ’05, Jennifer ’06, and Katie. His great-grandson Baker Carey Leigh is currently in Kindergarten, the fifth generation of the Ries family to attend Park School.

Carey had a lifelong devotion to Park School. He served for four terms on the Board of Trustees, and as a former Trustee, he continued to support many Development and Alumni efforts. As a parent, grandparent, and great-grandparent, Carey spent numerous afternoons on the sidelines of Park’s courts and fields. His love for Park athletics began while he was still a student. A three-season Park athlete, he played soccer, basketball, and lacrosse. An example of the Ries family’s generosity can be found in the Athletic Center, where The Ries Conference Room was named for his family’s contribution to the Breaking New Ground campaign.

The closing sentences on Carey’s senior page from the 1948 yearbook say, “Carey tells us that ‘Emanuel’ means ‘God sent.’ Disregarding the celestial implication, we are mighty glad that Carey was sent to us!”

Carey Ries demonstrated the kind of inspired and selfless commitment and devotion that made Park a stronger school. We are all mighty glad that Carey was sent to us. May his memory be a blessing.

To donate to this fund, please fill out the online form below; sharing recollections in the comments field is encouraged. You may also mail a check to the Development Office at Park School, 2425 Old Court Road, Baltimore MD 21208. Please include “Carey Ries Sports Fund” in the note.