The performing arts department develops the individual’s capacity to express and create in a variety of disciplines and forms while experiencing the collective power of ensemble. 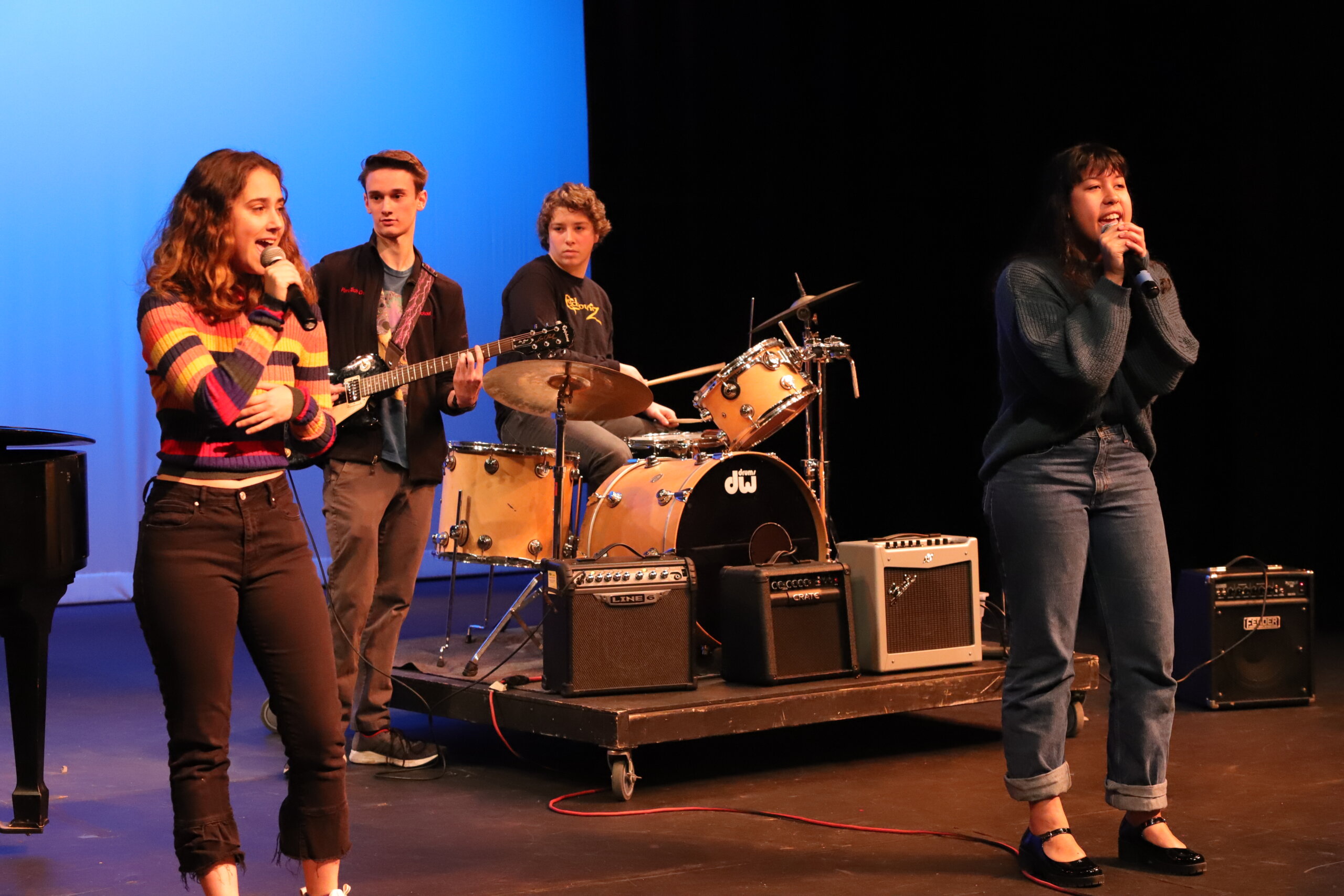 Park’s performing arts program offers students of all ages the opportunity to create, perform, present, and produce artistic work both individually and in collaboration with others. Our music, theater, and movement classes honor personal voice while addressing developmental needs. Students develop a repertoire of skills in the context of the disciplines of music, theater, and dance, while connecting their work and inquiry to societal, cultural, and historical contexts in order to deepen their understanding. Responding to and reflecting on the artistic process and performance itself are an integral part of the performing arts at Park: our classes, ensembles, and performance experiences focus on teaching young performers to understand and evaluate how the performing arts convey meaning.

It is our conviction that everyone is capable of experiencing the joy of music. The music department is committed to making music a part of students’ daily lives. By providing a variety of opportunities and individual and shared experiences, we strive to foster a lifetime appreciation and engagement in music. Students gain musical knowledge and are challenged to explore their musical potential through creativity, communication, collaboration, and critical thinking.  In this way, we develop a thoughtful, inspired, and enthusiastic music community.

Fourth and fifth grade students further their knowledge, performing in Lower School choral and instrumental groups and participating in an exploratory instrumental program.

The Middle School music program supports students in this dynamic developmental stage. Each year builds on previously learned skills, encouraging students to use music to express and explore their own identities. Being involved in musical communities gives students opportunities to build confidence and meaningful experiences with their peers.

Chorus, Band, Strings, Guitar, and Composition classes meet during the school day twice a week, and students can also audition for co-curricular groups such as Chamber Strings, the B#s (a cappella group), Jazz Band Ensemble, and Modern Music Band.

The Upper School music program promotes a balance between process and performance. Emphasis is placed on creativity, discipline, and innovation. All courses, whether composition or performance-oriented, stress careful attention to craft. Students are encouraged to discover their musical identities, pursue their interests, and develop talents through classes in music technology, history, and composition.An extensive range of vocal, instrumental, and production opportunities allows students to demonstrate their skills and share their work with the Park School community.

The Lower School Chorus is non-auditioned for students in Grades 4 and 5. Skills developed during rehearsals include proper vocal technique, diction, blend, ensemble skills, music reading, and part work. The chorus performs at assemblies and seasonal concerts.

Soundwaves, a co-curricular Lower School choral group, is comprised of Lower School Chorus students who are interested in  more performance opportunities and work on advanced choral repertoire. Soundwaves performances include assemblies, concerts, and a variety of Park community events.

The B#s is comprised of students who are in the Middle School Chorus and seek more performance opportunities. The group works on advanced choral repertoire and rehearses for one hour, once a week. The auditioned group’s performances include assemblies, concerts, and a variety of Park community events.

This non-auditioned chorus sings a variety of choral works and arrangements in several styles and languages. Parksingers is a class that rehearses three times a week for credit. Members of Parksingers perform in assemblies for all divisions, at seasonal concerts, and regional festivals.

The auditioned female a cappella ensemble performs traditional and contemporary songs. Singers work toward creating original arrangements tailored to the group, and often participate in competitions and festivals.

The auditioned male a cappella ensemble performs traditional and popular songs. Singers are expected to create original arrangements tailored to the group, and often participate in competitions and festivals.

All fourth graders learn fundamentals of string and wind instruments as part of their regular music class.

This group explores a variety of styles and arrangements specifically tailored for brass, woodwind, and percussion instruments. In addition to work on traditional band repertoire, the group learns music from the classic era of jazz and explores contemporary styles while working on adaptations of jazz, folk, and pop music.  The ensemble focuses on  improvisation and authentic engagement, refining its sound, and playing as a unit.

Chamber Strings performs advanced popular arrangements, chamber orchestra pieces, and small chamber group repertoire for a variety of events throughout the school year. Students auditioning for Chamber Strings should have at least one year of experience on their instrument and, if in sixth or seventh grade, be enrolled in the Strings class.

This auditioned group is comprised of vocalists and instrumentalists who are enrolled in private lessons or have two or more years of experience. Students in this group will work through more repertoire and will practice their stage presence at various performances throughout the year. This group’s repertoire ranges from modern music, to rock, to funk, to soul.

Stage Band is an activity that is open to all students interested in learning and improving skills on their instruments with jazz standards and classic tunes. The group rehearses once a week during co-curricular time. Stage Band performs at Goldsoundz* and an end-of-year assembly.

Park’s auditioned combo, Park Jazz Collective (PJC), is a for-credit class that is open to instrumentalists and vocalists interested in and familiar with learning jazz, Latin, Afro-Cuban, and contemporary styles. Ensemble and improvisational skills are emphasized. Jazz Ensemble performs at assemblies for all divisions, seasonal concerts, and community events.

Goldsoundz is an eclectic community music series that occurs several times a year, having grown to be a venue for musical creativity and expression. Goldsoundz provides opportunities for student-driven ensembles, MCs, spoken word, and live sound engineering.

Park’s theater program is integrated into the curriculum through course offerings in the Middle School and Upper School. During coursework and co-curricular activities, students explore the nature of what it means to be human, developing a sense of self as well as expanding an ability to empathize with others. Analyzing serious issues and creating thought provoking theater of import are central to the program, as is developing students’ creative self-expression, self-discipline, and self-confidence.

Upper School students, through a strong Stanislavski-based curriculum, develop fundamental skills that allow them to transform character psychology into truthful human behavior and that allow them to live truthfully within imaginary circumstances. Along with this traditional base in realistic acting, students may pursue in-depth study and performance of Shakespeare’s plays through collaborative courses offered jointly by the Theater and English departments. Courses in directing may lead a student to direct a fully mounted production in the winter or spring. Students wishing to pursue design may take design courses and earn credit for designing scenery or lighting for mainstage and blackbox productions. Additionally, courses in movement offer students the opportunity to explore embodied approaches to the creation of original and devised material.

Every fall, the 300-seat Meyerhoff theater rocks with the sounds of the musical. From classics like Gilbert & Sullivan’s The Pirates of Penzance,  to powerful musicals such as Lin Manuel’s In The Heights, Park offers opportunities to performers of all levels. This large community event might feature Middle Schoolers alongside Upper Schoolers and almost always shows off student designers, musicians, and choreographers.

The Winter Production every February features student directors directing short plays and has become one of the most popular shows of the year. Students who have taken the directing class direct plays of their own choosing, which often results in risky, hard-hitting, and often hilarious shows. Students who might not have the time to participate in one of the major productions can enjoy acting in a ten to thirty-minute play, produced in a festival format.

Shakespeare has long been a tradition at Park, and every other year, the theater department collaborates with the English department to study one of Shakespeare’s plays in a fall English class and then produce the play as the Spring Production. Productions include Much Ado About Nothing set in a Spanish Villa, a mixed race cast in Romeo & Juliet, and a dazzling production of As You Like It with a forest 400 years older than its counterpart contemporary court setting.

Groundbreaking plays such as Moises Kaufman’s The Laramie Project and original adaptations such as #AntigoneAmerican, inspired by Michael Thomas’ death in Ferguson, complete our theater season on alternating years with Shakespeare.

Only at Park are freshman and sophomores given their own production. No pesky juniors and seniors to compete with for roles. Every May, the fresh/soph play allows ninth and tenth graders to research, analyze, rehearse, and perform a play that’s chosen just for them. Recent productions have included Jessican Swale’s Bluestockings and Rick Elise’s Peter and the Starcatcher.

This class is dedicated to the construction of sets for the Upper School productions. In the first semester, students are engaged in building scenery for the fall musical and then helping with the 8th Grade Production. In the spring, they begin with the 8th Grade Production and then support the next three shows in the Macks-Fidler Theater. Working backstage involves reading plans, building and painting scenery, as well as hanging and focusing lighting fixtures based on a lighting plot. Students taking this class may work backstage during the show if they wish to do so.

Design for the Performing Arts

This class explores the processes of designing scenery, costumes, lighting, and audio for theater, dance, and opera. We examine script analysis, production objectives, theatrical styles, design research, production organization, and collaborative creation. The elements of design and different methods of visual presentation are explored, including consideration of the work of significant performing arts designers. This class provides students with the skills needed to successfully design productions at the school and in the community.

The primary goal of the Drama Program in Middle School is to help students understand themselves and the world they live in, and to develop self-expression, self-discipline, and self-confidence through an active physical, emotional, and intellectual identification with a fictitious situation. An equally important aim is for students to understand the theater as a serious intellectual pursuit that requires rigorous work and attention and is, at its core, communal in nature. The most developmentally appropriate form of a drama class for young adolescents is one that teaches through the aesthetic experience, not for it. To that end, all sixth and seventh grade classes are training, rather than performance, based. In the eighth grade, students may elect the production as a first-semester offering. A Park tradition, this is an integrated theatrical experience where students participate in all aspects of the production: lighting, sound, set design, costumes, makeup, and acting, culminating in a full-length play at the end of the term.

All sixth and seventh grade students take one semester of theater in both their sixth and seventh grade years as part of their Middle School arts course of study.  Additionally, all eighth grade students participate in our eighth grade arts elective program, with elective course offerings in theater, visual art, music, and movement, among other topics. For a listing of past eighth grade arts electives, please visit our Middle School Program of Studies.

Eighth graders present a full-stage theatrical performance at the end of the semester. Students study all of the production elements that combine to make an integrated performance in a theater troupe. These elements include: light, sound, set design and construction, properties, costumes, makeup, text, and stylized movement. Significant opportunities for leadership exist both onstage and as part of the stage/design crew. 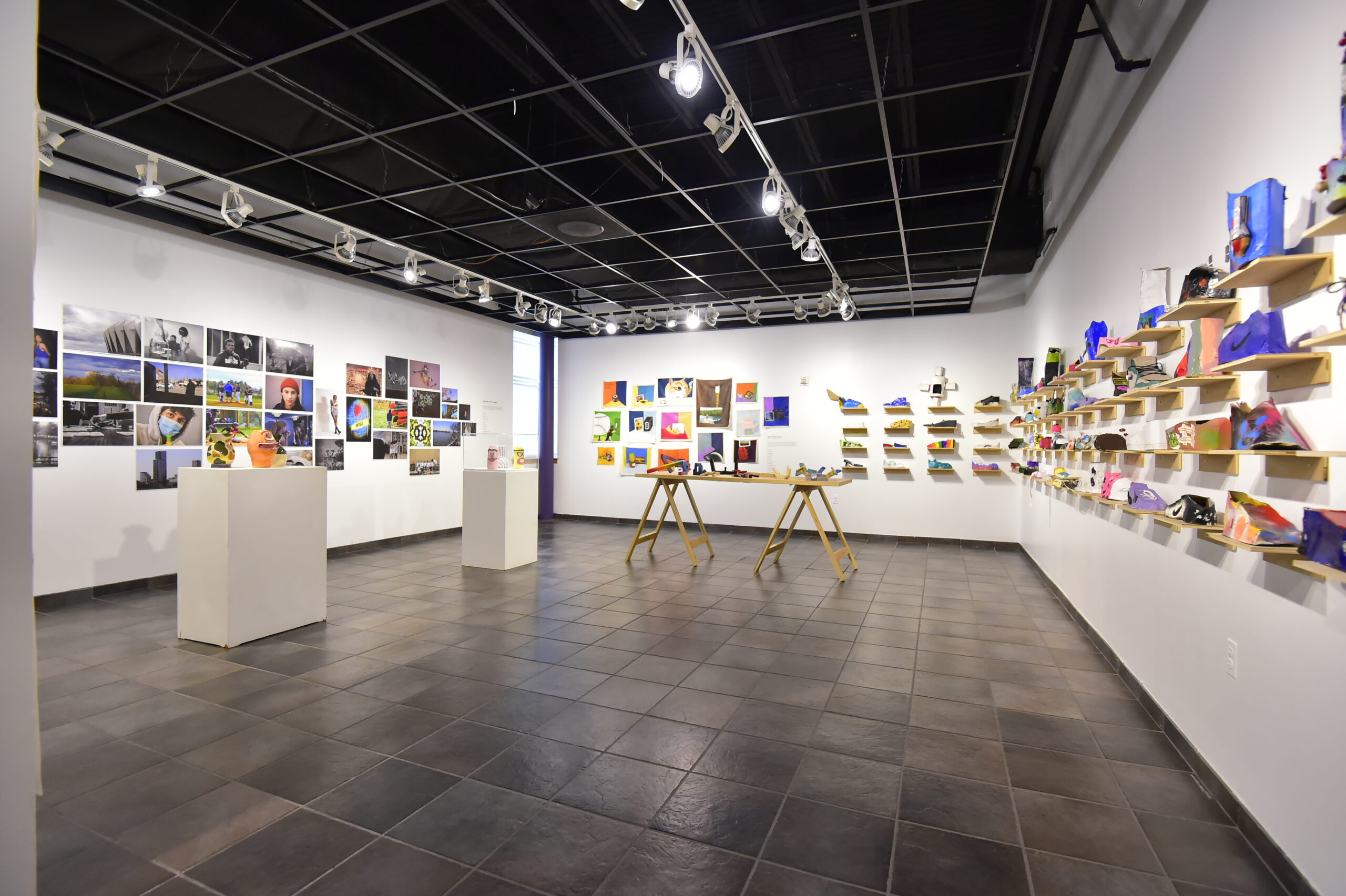 Visit Our Exhibits
Visit our exhibits in the Richman Gallery and the Davison Lobby. 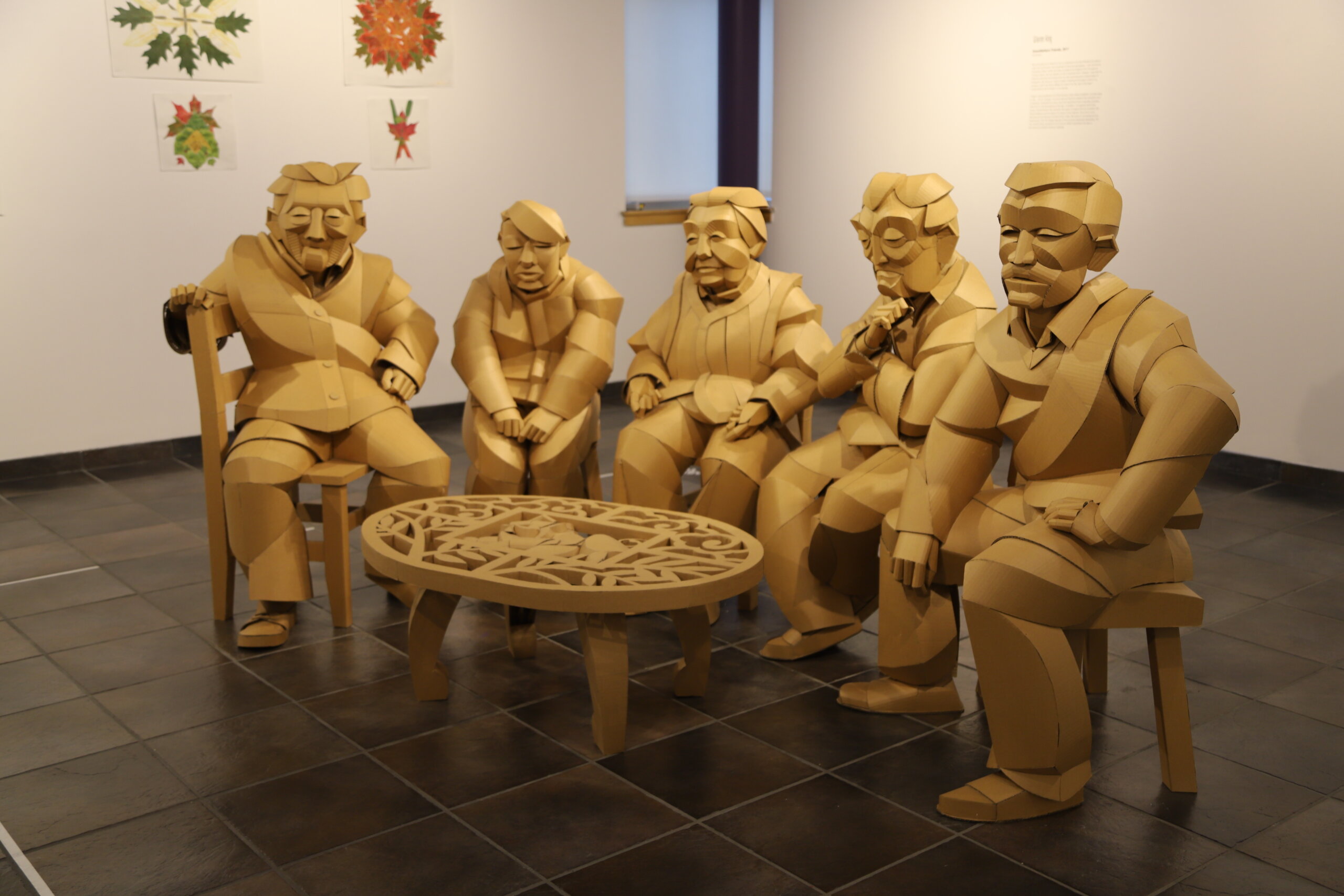 Resident Artists
Park is able to bring an accomplished artist to campus each year. 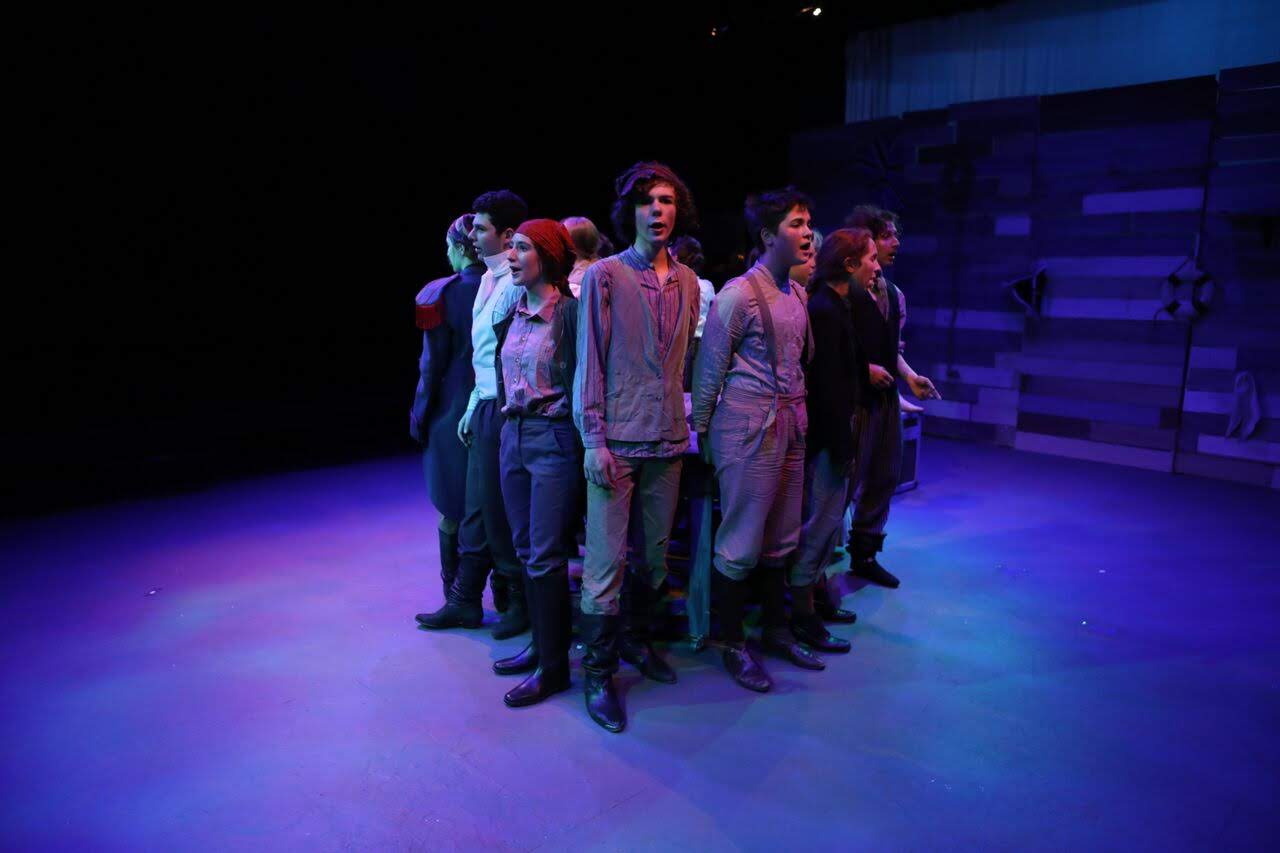