The Hired Girl: Press and Reviews

Released on September 8, "The Hired Girl" is an exploration of feminism and housework; religion and literature; love and loyalty; cats, hats, and bunions. It has already earned starred reviews from Publishers Weekly, Booklist, Kirkus Reviews, and School Library Journal.

The Baltimore Jewish Times published a feature story about Laura Amy Schlitz in January 2016. To read the article, click HERE.

“While the novel, set in 1911 and presented as Joan’s journal, displays and indeed revels in the classic tropes of the coming-of-age story, it is, the judges noted, very much a book of our time, confronting Joan with questions about prejudice and religious faith and tolerance in ways that speak to readers today without trapping itself into anachronism or wishful thinking about the past. It provides immersive detail about Joan’s circumstances that always serves the character and her story, and not once does that story forget it is Joan herself who is telling it. The judges saw more than a bit of L. M. Montgomery’s Anne Shirley in good-hearted but impulsive Joan, and Schlitz shares Montgomery’s ability to keep our respect for her heroine even while we cringe at some of her more ill-advised actions (a notion to convert the Rosenbach grandchild, for example). Like Joan herself, The Hired Girl is comedic, romantic, and always very real.“

—Roger Sutton, editor in chief of The Horn Book

In 1950, the Jewish Book Council created The National Jewish Book Awards program, which presented awards to authors of Jewish books at its annual meeting. Past notable literary winners include Deborah Lipstadt, Bernard Malamud, Chaim Potok, Philip Roth, Elie Wiesel, and Jonathan Safran Foer. Awards are presented in 14 categories. The Hired Girl was notable in that it is the first winner in the Young Adult Literature category.

“Fans of Little Women, rejoice. Janet’s impassioned diary, inspired by Schlitz’s own grandmother’s journals, explores themes of faith and feminism, love and literature, culture and class in early 20th-century America, all the while charming readers with a vivid cast of characters.”

“It’s a pity that fruitcake has such a poor reputation in this country, because a slice of the stuff at its tastiest is the perfect simile for the rich, variegated deliciousness of Laura Amy Schlitz’s The Hired Girl. What a heroine, not just for the early 20th century, which Ms. Schlitz skillfully evokes through Janet’s impressions, but also for our own time. Brava to Laura Amy Schlitz, whose enchanting writing has brought such a spectacular character to young people’s literature.”

“Joan is reminiscent of heroines like Anne Shirley, Jo March, Cassandra Mortmain, and her own favorite character, Jane Eyre…Her overactive imagination, passions, and impulsive disregard for propriety often get Joan into trouble, but these same qualities will endear her to readers everywhere.”

“Written as a diary, the first-person narrative brings immediacy to Joan’s story and intimacy to her confessions and revelations. The distinctive household setting and the many secondary characters are well developed, while Joan comes alive on the page as a vulnerable, good-hearted, and sometimes painfully self-aware character struggling to find her place in the world. A memorable novel from a captivating storyteller.”

“Coming-of-age drama and deeper questions of faith, belonging, and womanhood are balanced with just the right blend of humor. A wonderful look into the life of strong girl who learns that she needs the love of others to truly grow up.”

“The book is framed as Joan’s diary, and her weaknesses, foibles, and naiveté come through as clearly—and as frequently—as her hopes, dreams, and aspirations…by the end readers feel as if they’ve witnessed the real, authentic growth of a memorable young woman.”

“The diary format allows Joan’s romantic tendencies full rein, as well as narrative latitude for a few highly improbable scenarios and wildly silly passion. Tons of period details, especially about clothing, round out a highly satisfying and smart breast-clutcher from this Newbery-winning author.”

“I was impressed with the author’s finesse of presenting this particular trait in the main character, having her make mistakes without having readers wince at the bluntness of the main character’s actions. I was disappointed that the book wasn’t longer.” 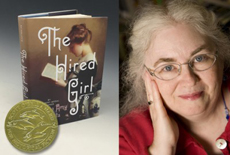